The Supreme Absolute Truth, Sri Krishna is the source of all the spiritual and material worlds and is the worshipable Supreme Lord of all the sages and demigods. No one is superior or equal to Him. He is one without a second and is always self-satisfied. Yet, in order to taste transcendental mellows, He expands into unlimited forms which are known as expansions or ‘prakash’. Lord Krishna manifests as His first expansion in the form of Lord Balarama- the son of Rohini. Lord Balarama appears as the elder brother of Sri Krishna and assists the Supreme Lord in His transcendental pastimes. Balarama assists in Lord Krishna’s innumerable spiritual pastimes in both the spiritual and material realms.

Lord Balarama also manifests as Lord Sankarshana, the predominator of the creative energy. He creates and is also the shelter of the spiritual and material worlds. By Krishna’s desire and the power of the spiritual energy, Lord Balarama creates the transcendental spiritual world, consisting of the planet of Goloka Vrindavana [the super most spiritual planet] and the innumerable Vaikuntha planets [in the spiritual sky]. (Chaitanya-caritamrita, Madhya-lila, 20.255-6)

Lord Balarama especially assists Lord Krishna in the creation of the material world. After Balarama has expanded Himself into Lord Maha-Sankarshana, He expands Himself into four different forms, including: 1) Karanadakashayi Vishnu [Maha-Vishnu], 2) Garbhodakashayi Vishnu [the Vishnu expansion in each universe], 3) Ksirodakashayi Vishnu [the Super soul in each living being], and 4) Sesha, also called Seshanaga, who manifests as the comfortable couch and resting place for Lord Vishnu and also supports the unlimited universes upon His hoods. These four plenary portions assist in the material cosmic manifestation. Sesha is Balarama’s form who assists in the Lord’s personal service. He is also called Ananta, meaning unlimited, because He assists the Lord in His unlimited variety of pastimes. (Chaitanya-caritamrita, Adi-lila, 5.4-6, 8-11). 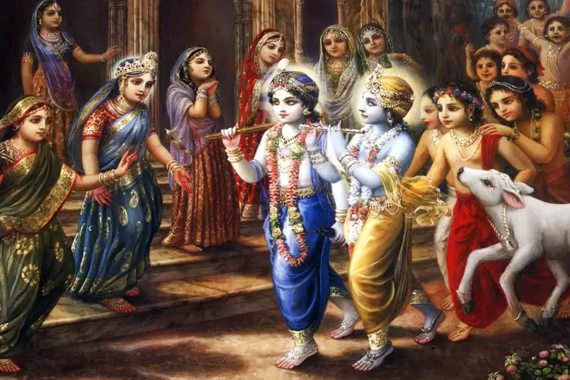 Lord Krishna is the source of all incarnations as described in the Srimad Bhagavatam. In the spiritual realm of Dvaraka, Sri Krishna expands Himself as Balarama, who then further expands into Pradyumna and Annirudha. These four again expand into a second quadruple which is present in the unlimited Vaikuntha planets as the changeless, transcendental expansions of the Supreme Lord Krishna. In the Vaikuntha realm, all the planets are sustained by the spiritual creative energy known as the suddha-satva. This energy is the display of the creative potencies of Lord Balarama. Lord Sankarshana who is the expansion of Lord Balarama is the original source of the Causal Ocean where Lord Maha Vishnu sleeps while breathing out innumerable universes. When the cosmic manifestation is annihilated, all the indestructible jivas take shelter in the body of Maha Vishnu until the next creation. So, Balarama as Lord Maha Sankarshan is the source of Lord Maha Vishnu who is the Supreme Master of this material world and it is from Him that all energies and potencies for the manifestation of this material world originate. 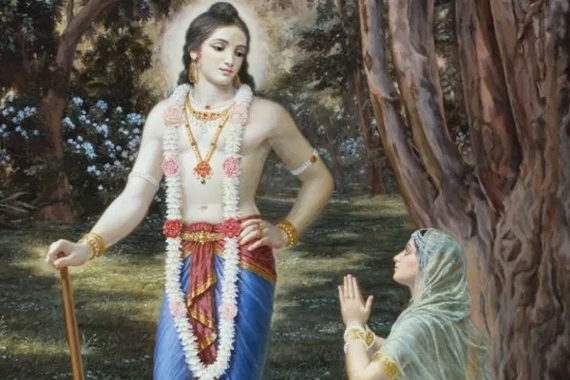 Lord Balarama serves Sri Krishna in the shanta rasa by manifesting Himself as various paraphernalia that serve the Lord. When Krishna so desires to appear in the Vishnu form, Lord Balarama serves Him as the sleeping couch in the form of Ananta Sesa. Lord Balarama’s matchless desire to serve Krishna is portrayed as He manifests as the Lord’s dress, ornaments, crown, umbrella, flower garland, anklets, and slippers of the Lord. The abode of the Lord is none other than Balarama Himself.

In the dasya rasa, Lord Balarama is always ready to fulfil the desires of Lord Krishna. Whenever the Lord would get exhausted while performing His transcendental pastimes of playing with the cowherd boys, Lord Balarama used to make Sri Krishna lie down and used to fan him and message His legs. Lord Balarama exemplifies the attitude of service when he appears as Lakshmana to serve Lord Krishna who appears as Sri Rama Chandra. He happily agrees to follow Sri Rama into the forest for a long fourteen-year exile, not only leaving all the royal comforts behind but also puts aside the most basic necessities of eating and sleeping for the entire fourteen year of exile so that there is no hindrance in the service of the Supreme Lord.

In the sakhya rasa, Lord Balarama assists Lord Krishna in pastimes of stealing butter from the houses of the gopis and while playing various games with the cowherd friends of Vraja.

Lord Balarama is also very protective towards His younger brother, Sri Krishna and exhibits deep concern at many instances like when the Lord eats dirt. His immense botheration and concern for Krishna made Him to immediately tell Mother Yashoda that little Krishna had eaten dirt. Lord Balarama cannot bear even the slightest pain that might inflict to His younger brother and it is this parental affection or vatsalya rasa that Lord Balarama exhibits as the elder brother of the Lord ensuring His safety always.

Lord Balarama also serves the Lord in the mood of madhurya by manifesting as Anangamanjari, the younger sister of Srimati Radharani and assisting in the transcendental loving pastimes of Sri Radha Krishna.

Thus, Lord Balarama has the mood of ‘sankula-rati’ and serves the Supreme Lord in all the five forms of devotional service. Lord Balarama is also the Original Spiritual Master who appears in this Kaliyuga as the most magnanimous, Sri Nityananda Prabhu and propagates Krishna Consciousness to one and all, even to the ones who are not at all qualified. Hence, Srila Narottama Das Thakura sings,

heno nitai bine bhai radha-krsna paite nai
“If one does not take the shelter of the lotus feet of Lord Nityananda (Lord Balaram), it is not possible to approach Sri Radha Krishna.”

Lord Balarama is the bestower of spiritual strength and He spiritually strengthens anyone who surrenders unto His lotus feet and fixes Him on the devotional service of Sri Radha Krishna. But for the mercy of Lord Balarama, we can never approach or enter Vrindavan.

The most auspicious appearance day of Lord Sri Balarama is celebrated with great enthusiasm here at GIVE. The devotees at GIVE fast till 12 noon. The entire ashrama is decorated with lightings and beautiful flowers and handicrafts. Lord Balarama is the bestower of spiritual strength and is the protector of all devotees and hence the devotees celebrate ‘Rakhi’ with Lord Balarama. There is ecstatic kirtan, followed by spiritual discourse by Sri Vrindavanchandra Das ji and cake cutting ceremony with Sri Sri Radha Gopshreshtha, the Prince of GIVE. The devotees, then relish delicious prasadam feast and take the blessings of the most merciful Lord Sri Balarama. We invite all along with their near and dear ones to take this opportunity to attend this grand celebration at GIVE and receive the mercy and blessings of Lord Balarama on His appearance day.